You are viewing the public version of Crohnology. You can see this and much more data as a full member. Sign up
Blogs > Lizzy's Blog > My Black Narssicus 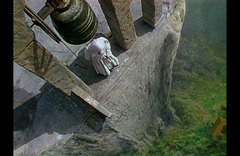 Black Narcissus is a film directed by Powelll and Pressburger in 1947 although the film looks like it was shot on location but its actually all filmed in a studio and the scenery is all beautifully hand painted on glass. Its an incredibly unnerving film which it tells the story of a group of nuns who go to live in the Hiymalayas in order to convert the local population. One nun goes mad and throws herself off the bell tower. This is what I kept comparing my state of mind to when I was delirious on Monday morning running a 42 degree temperature. I kept saying I feel like I'm in the film Black Narcissus.

The last sequential events I remember is putting on a hospital gown in preparation for an operation I was supposed to be having that morning at about 7am. Then me getting so cold I started shivering and thats it. The next clear this I remember a doctor and a nurse woke me up and they seemed to be taking someones blood but I wasn't sure why. The doctor came and asked me where I was and I said "Margate" (I'm in London) then he asked me what year it was and I didn't know! It was 11am in the morning. Its really strange to think there are whole hours where you were talking and doing things but you have no idea what they are.

I remember thinking I had gone for the operation but also that I was IN Zelda Spirit tracks the Nintendo DS game. I remember being wrapped in wet towels which I wasn't best pleased about, I remember having a physical fight with a nurse because she wouldn't let me leave in just my pants. I remember talking to my mum about being mad and feeling like I was in Black Narcissus.

Turns out I didn't have an ear infection I had sepsis, the PICC line I had put in for TPN feeding they think had got infected. This they think was due to the fact they gave me all those lovely steriods which made my body swell up in a previous post which meant that my body was absorbing the azathioprine better which meant I had a much lower white blood cell count. Interesting theory. You'll be pleased to hear I have made a good recovery. Although I've had 4 cannulas and 3 missed cannulas this week which is as much as anyone needs. One day they took 3 sets of bloods. My arms look like a dot to dot. I get to go home on Sunday which I can't wait for! The ward isn't that fun anymore. We have had a lot of mad people recently. I have to come back in January for surgery and who knows what....Bone Marrow Transplant?