You are viewing the public version of Crohnology. You can see this and much more data as a full member. Sign up
Treatments > Medications > Remicade 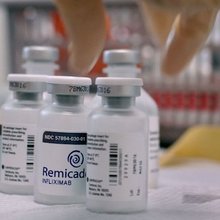 Infliximab was first used for closure of fistulae in Crohn's disease in 1999. It has also been used to induce and maintain remission in inflammatory Crohn's disease. As Infliximab targets TNF, thought to be more related to Th1 cytokines, the drug was initially considered of limited use against ulcerative colitis which was thought to be a Th2 disease. However, patients with ulcerative colitis have begun to be treated with infliximab on the basis of two large clinical trials conducted in 2005.

Infliximab can cost $19,000 to $22,000 a year per patient wholesale, according to Centocor. It is typically covered under major medical insurance (rather than prescription drug insurance).

Infliximab is administered by intravenous infusion, typically at six- to eight-week intervals, at a clinic or hospital. It cannot be administered orally, as the digestive system would destroy the drug.

Next medication people use after Remicade

Current Users' Health Compared to people not currently on Remicade