You are viewing the public version of Crohnology. You can see this and much more data as a full member. Sign up
Treatments > Medications > Pentasa 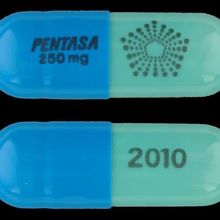 Mesalazine also known as mesalamine or 5-aminosalicylic acid is an anti-inflammatory drug used to treat inflammatory bowel disease, such as ulcerative colitis and mild-to-moderate Crohn's disease. This drug is a bowel-specific aminosalicylate drug that acts locally in the gut and has its predominant actions there, thereby having few systemic side effects. Pentasa is mesalazine formulated as an oral capsule.

Mesalazine has been used (as extended-release oral preparations) for the management of active Crohn’s disease and to induce and maintain clinical remission in adults with mildly to moderately active disease.

Information from Drugs.com and Wikipedia

Next medication people use after Pentasa

Current Users' Health Compared to people not currently on Pentasa